Behavioural Economics as a tool for enterprise security 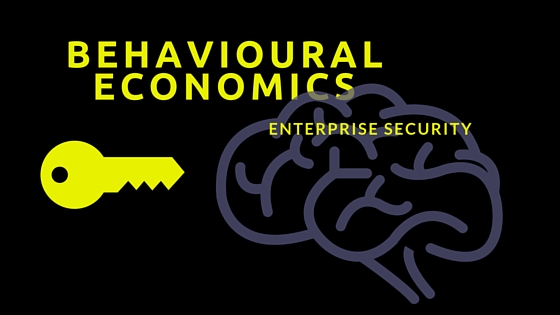 Have you ever wondered why on your electricity bill there is a representation of your household’s usage against the average 2, 3 or 4-person household telling you whether you are over or under? How does it make you feel?

It is time for security professionals to start using these techniques to help protect organisations and not just to influence people to buy a particular soap, car or follow a sporting code.

What is behavioural economics

Behavioural economics looks at the relationship between the decisions that we make and the psychological and social factors that influence them. A significant amount of study in this area has been on people’s economic decisions, but the tools and techniques that have been tested can be applied in many other contexts.

Daniel Kahneman and his late research partner Amos Tversky are the two research psychologists most associated with behavioural economics. In 2002, Kahneman shared the Swedish Banker’s Prize in Economic Sciences in Memory of Alfred Nobel for this work. Kahneman’s 2011 book “Thinking Fast and Slow” explains many of the concepts in accessible terms. Kahneman and Tversky built on earlier studies that cut down an idea that now sounds quaint, the idea that humans act entirely rationally at the population or large group level. Even so, this idea was at the heart of much classical economic thinking.

You might not think at first that this seems entirely related to enterprise security. However, if you consider that the premise of behavioural economics is that people do not always make decisions that are entirely rational, you’d probably see the connection! In addition, the ideas that small (and sometimes even intangible) incentives and disincentives can be used to guide individual actions on a large scale are also very important. It is this second aspect which is of greatest use to the enterprise security practitioner.

Behavioural economics works by assuming that in many cases, people making the ‘wrong’ decision within an organisation do so because they have imperfect information or lack the right incentives or disincentives.

Psychologists have also found that people can often exhibit a strong inclination to conform to social norms. The social norms change with the social groups that we participate in. Essentially, we often do things because our friends, colleagues, or those we admire, do.  Our friends and colleagues provide us with informational social influence or social proof. In plain English, we like to follow our herd and keep up with the Jones’.

Curiously though, we seem to struggle more with changing our minds than coming to a decision in the first place. The idea that when the facts change, people change their minds is a bit tricky for many. Associated with this curious aspect, researchers from Harvard Business School have claimed also that we tend to think we are more moral than we actually are and inhabit an “ethical mirage”.  This can mean there’s a disconnect between how we describe our decisions and how we actually behave. If we accept this somewhat unflattering portrait of human behaviour, it means that we tend to take a position that justifies our actions whatever they were, once we’ve made a decision. And we want more justification to change our minds than we needed to come to it in the first place!

But what if we could get people to make the ‘right’ decision in the first place. Then they wouldn’t have to justify wrong decisions. This is where the research findings of behavioural economics are tested at organisational and national scale.

Behavioural economics concepts are being applied at the public policy level by governments wanting to encourage certain behaviour without going to the expense of legislating compliance. It is expensive to make something illegal. Sometimes it is absolutely necessary e.g. murder, but the society has to create enforcement systems, pay the enforcers, and then who watches the watchers? Some enlightened government agencies are dabbling with the use of behavioural economics to achieve high levels of compliance.

In the UK and latterly also in Australia, the tax authorities have been attempting to use behavioural economics techniques. So called ‘nudge units’ have been set up to coax to get people to do their taxes by using social proof methods.  Informing taxpayers who are late paying that “90% of people pay their taxes on time” increases the rate of taxpayer compliance. This achieves the policy objective of getting timely tax payments, but does it in a way that won’t generate negative headlines. This in turn allows the tax agency to focus on individuals who are intentionally breaking the law, rather than doing so because life got in the way.

Another recent example has been the introduction of the “No Jab, No Pay” policy by the Australian Government where parents do not get all their family tax benefits unless they are willing to vaccinate their children. Rather than making it illegal for children to remain unvaccinated, the government has incentivised parents to vaccinate. This, added to significant social pressure from almost all the medical community, means that Australia’s childhood vaccination rates are generally very high and we see fewer distressing pictures of children with whooping cough around the country.

One interesting way that companies are using social proof is in encouraging households to save water and electricity. Increasingly, utility bills show householders where they stand in comparison to their suburb in terms of water or electricity use. The householder can then consider whether they want to moderate their behaviour. Literally to keep up with the Jones’!

Marketing firms use many behavioural economics techniques to encourage us to use particular products. Many of us take advantage of airline frequent flyer programs that give rewards for the flights taken by members. The extremely successful travel website, Tripadvisor awards points to its website users for the travel reviews that they produce. However, Tripadvisor points have absolutely no dollar value. They are valuable only to users in terms of social proof to that community that a member is a well seasoned traveller. You may have realised that the majority of social media operates in a similar way.

Why should enterprise security professionals consider using behavioural economics in their organisation?

It is expensive and time consuming to maintain rules for the increasingly complex environment that organisations operate in. Rules are difficult to write well and often only work in limited circumstances. The more detail, the more exceptions need to be built. Quite often rules also create a culture where individuals only follow the letter, not the spirit of the rules. This can contribute to the creation of a workplace which is not adaptable and where security is blamed for the problems of the organisation.

This can lead to situations where workers sometimes choose to circumvent organisational rules in order to achieve local goals. A worker might shortcut a process to ensure that their team are able to complete it faster. The individual might rationalise this as being good for their company in that the job is completed faster and good for themselves in that they can go home earlier. However, the decision that they have rationally come to might be the ‘wrong’ decision from the perspective of their organisation. The shortcuts that have been introduced may decrease organisational security.

How do organisations change this? By changing the decision-equation the worker takes when he or she makes that decision. This is very much the place of behavioural economics in enterprise security. Organisational messaging which demonstrates the social norms of the organisation from a security perspective are vital. So to are tools and procedures which endeavour where possible to make the secure decision, the easiest one to make.

Organisations are increasingly moving to principles and risk based frameworks in many areas including security because they find the sheer complexity of business overwhelming otherwise. This was one of the main drivers for the creation of the Australian Government’s Protective Security Policy Framework. The PSPF tries to get government agencies to focus on their security outcomes, rather than on process. Brain scan of white matter fibers, brainstem and above.  Laboratory of Neuro Imaging at UCLA and Martinos Center for Biomedical Imaging at MGH / www.humanconnectomeproject.org

Enterprise security professionals should be asking where they can apply these behavioural economics techniques in their organisations. The possibilities are varied and many, but one financial institution has used behavioural economics give nudges to staff regarding personnel security. In one case, to improve their reporting of change of circumstances by giving them a simple message that “most people in our organisation report their change of personal circumstances within four weeks”.

In the government space, there has been debate about whether it is possible to create an ‘information classification market’ which balances the need to classify information appropriately against the costs to organisation of over-classification in terms of long term storage and devaluation of security markings. Such a market could work by incentivising managers to ensure that staff were classifying information as accurately as possible. As always, the trick would be to ensure that the incentives matched the risk profile of the organisation.

Every organisation is different and so are the opportunities for using these techniques to improve your enterprise security. An earlier version of this article appeared in the 100th edition of Security Solutions magazine  http://www.securitysolutionsmagazine.biz/